It may not be fancy, but Bear Creek Golf World in west Houston offers three golf courses for players on a budget.

The long par-4 18th hole on the Masters Course at Bear Creek Golf World requires a precisely placed tee shot and an accurate approach over water.
«

In Houston, it all changed in the late 1960s, when the President's Course at Bear Creek Golf World opened, the first of three golf courses at the facility. Dick "Pro" Forester, known as the father of daily-fee golf in Houston, opened Bear Creek. Forester later founded Cypresswood Golf Club, another 54-hole facility, with his two sons, in the northern suburb of Spring. Cypresswood, no longer owned by the Forester family, recently closed its Creek Course, leaving Bear Creek as Houston's only 54-hole facility.

Since the 1969 unveiling of the President's Course, the Houston-area golf landscape has changed dramatically. The metro area is home to more than 150 golf courses, with the majority avaiable for daily fee or semi-private play. Many of the facilities opened during the golf boom of the mid- to late '90s. And fortunately for Houston golfers, most survived.

Bear Creek has adjusted with the times, affected by the economic climate -- and the actual climate.

The Masters Course at Bear Creek opened in 1975 as one the city's jewels. Designed by Jay Riviere, who also designed the President's Course, the Masters served as a favorite for top players and as a perennial tournament site.

Floods have taken their toll on the complex, now operated by Palmer Golf Management. Bear Creek Golf World's 6,800-yard, tight par-72 Masters Course remains fairly difficult, with narrow fairways, mature trees and plenty of water to boot. The ninth and 18th holes, bending par 4s with lakes in front of the greens, rank among the toughest holes in Houston.

What's missing, though, are dozens of sand bunkers, greenside and in the fairways, which once helped frame the holes and added to the golf course's difficulty.

The problem: The Bear Creek Park complex sits on a flood plain. When heavy rain pelts the Houston area -- a common occurrence -- the golf courses are easily submerged.

"We just couldn't continue to keep rebuilding the bunkers," said Neil Sherrod, Bear Creek Golf World's director of golf. "So we filled them in with grass."

Honestly, that was probably the best solution, considering the competitiveness of the golf business these days. In order to keep prices from skyrocketing in this down market, maintenance must stay under control. And constant bunker projects make for a large expense, both in material and labor.

Indeed, Bear Creek Golf World's green fees are competitive. Times exist when you can play the Masters Course with a cart for as little as $25; the President's Course and the par-66 Challenger Course designed by Bruce Littell, are even more affordable. Locals can also purchase annual memberships for as little as $1,400, covering all fees and golf-cart rentals on all three courses.

If conditioning stands atop your list of priorities, Bear Creek won't blow you away. But if you're looking for a golf experience to challenge every level of player, Bear Creek Golf World is a pretty good option.

The Masters Course remains a good test for skilled players -- maybe a little too difficult in the areas of the mature oak trees that line fairways. Try hitting an escape shot from under the canopies, which often drape just a foot or two above the ground. It requires some creativity.

"I love the layout," local resident Dana Simpson said after playing the Masters Course for the first time. "I just wish it was in a little better shape."

A tough 2010 winter left the golf course's Bermuda fairways and greens behind schedule in the spring, but Sherrod said in early May that they were improving.

Of course, expectations should match the price, and they do at Bear Creek. To take it a step further, golf needs more facilities like Bear Creek Golf World. Not all golf courses must include greens running 10 or 11, flawless fairways and perfectly maintained bunkers. And if we want to keep people involved in the game, we need more affordable golf.

Bear Creek Golf World is exactly that -- affordable golf and enjoyable, too, if you keep it in perspective. 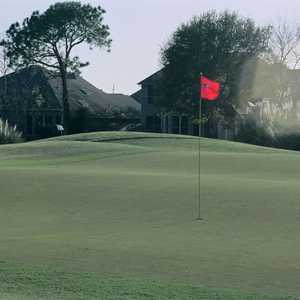