KATY, Texas -- It's been about a year since the Golf Club of Cinco Ranch redid its greens and bunkers, and the course still has its shine.

Both nines at the Golf Club at Cinco Ranch end with strong holes.
«

Carlton Gipson designed the Golf Club At Cinco Ranch in the early 1990s. It's a long golf course that features an ocean of water impacting play on 16 of 18 holes. For the most part, the holes are straight and open, with minimal trees framing the paths to the greens.

Last year, as part of an overall renovation, the golf course got new MiniVerde greens, the same grass that the TPC Sawgrass Stadium Course opted for in its renovation a couple of year ago. Redstone Golf Club, which plays host to the Shell Houston Open, has Mini-Verde, too.

The choice has proven to be a good one as Cinco Ranch, a year later, still has terrific greens, and the rest of this 1994 Carlton Gipson design is in pretty good shape, too.

As part of the half-million dollar renovation, Cinco Ranch's bunkers also were filled with a newer variety of bright white sand that drains better than the old sand. And they also got new liners and drainage, which is necessary for the Houston area, which gets a lot of rain.

Most of all, though, the renovations and subsequent conditioning are allowing this 6,922-yard par 71 to put its best foot forward.

There's a reason that the Golf Club of Cinco Ranch is one of the busiest golf courses in the Houston area: It's fun.

The late architect Gipson did nearly 20 golf courses in the Houston area alone, and many of them are among the area's favorites. At the Golf Club at Cinco Ranch, he made good use of water features, trees and doglegs, but most importantly, the homes don't come too close to the action.

Another part of the renovation that shouldn't be overlooked is that the fairways were reworked as well.

"There's probably a little more definition to the course now," head professional Chris Paul said. "You can definitely see it from the tee box."

The golf course is anything but boring. Each hole is different and several stand out. Both nines end with strong holes that take advantage of the water. The ninth has a large pond in front and left of the green with big bunkers right. The 18th has water running in front of the green, and when this hole plays into the wind, players are often coming in with a long club.

The par 3s are also strong, with water coming into play on two of them. And there's a nice variety of par 5s.

The Golf Club at Cinco Ranch is simply a solid play. Good conditions combined with a friendly staff that moves play along on the weekend combine for an enjoyable golf experience.

There are plenty more extras, however, that add to the experience. The facility likes to run a promotion where customers can get their first beer for a penny a stroke in the clubhouse (for most of us, that's no more than a dollar), and the clubhouse is certainly an inviting place to settle up after a round.

Practice facilities are also more than adequate with a large grass range, short-game area and putting green. Cinco Ranch also has one of the largest Player Development Programs in the country with more than 800 members. For a nominal monthly fee, PDP members are allowed unlimited use of the practice facilities, and they get to attend free clinics by the professional staff. 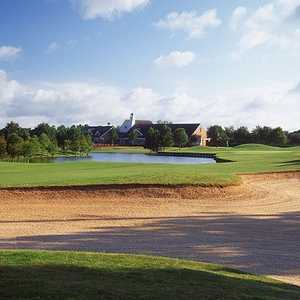 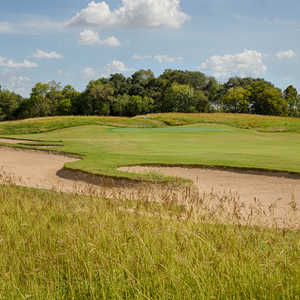