A true original as a person and an architect, a, 'Tilly,' course was one that exuded old-world charm, quality over quantity and was not mass-produced or pre-formed in any way. Each Tillinghast design took on its own character, but each emphasized skill and cunning over raw power and length.

In the early 1920s, Tillinghast took a swing through South Texas constructing and renovating several Lone Star courses, but perhaps his most lasting tribute is San Antonio's Oak Hills Country Club. The longtime site of the PGA Tour's Texas Open, it recently hosted the U.S. Junior Amateur Championship this summer, giving the country's best junior golfers a chance to solve the Oak Hills puzzle, which has baffled their elders since it first opened in 1922.

Known as one of Texas' most historic courses, Oak Hills has hosted almost every major professional and amateur golfer who has journeyed to South Texas over the last eight decades, including devoted amateurs like Bob Hope and former President George Bush.

The classic design techniques, along with the numerous historic rounds Oak Hills has hosted, is why the club is usually on the top of any serious golf fan's wish list to play or at least visit.

"Oak Hills is one of the great old style courses we play," said longtime PGA Tour player Tom Kite. "If it had another 500 yards, it would be one of the finest courses in the country."

The great space debate was brought on by something Tillinghast never could have imagined when he designed the course amidst the gently rolling hills of San Antonio nearly 80 years ago.

The sprawling South Texas Medical Center that sits just to the right of the driving range and along the front nine has hemmed in any possible expansion and has sadly lowered the course's defenses against today's modern equipment and longer-hitting players.

The PGA Tour exited Oak Hills after its 1994 tournament, moving to the longer and more spacious La Cantera course in far West San Antonio. The par 71 Oak Hills can only be stretched to 6,501 yards, but then a continuous long driving contest was never Tillinghast's style. He favored shorter, twisting, more challenging holes where golfers are sometimes forced to leave their driver in the golf bag and think their way around each individual challenge.

"Oak Hills requires you to hit every shot in your bag," said former Texas Open Director Nick Milanovich. "You can't just walk out and find your ball if you get off line."

Large natural trees with huge mounds, deep bunkers and sloping greens with occasional water were mostly his style. Brains over brawn were the nature of his designing game.

From the first moment the golfer turns off the busy San Antonio road and goes through the gated Oak Hills entrance, they get a real feel for the rich Oak Hills experience and the Tillinghast touch. The driveway to the clubhouse leads through a thick grove of old Oak trees whose thick branches form a canopy over the driveway.

"This is a wonderful blend of holes which require finesse and power, strategy and skill," said former Head Pro Warren Chancellor.

The examination starts early with the par 4 first hole, which seems innocent enough as it bends gently to the left, but its imposing trees on the right and small green have been enough to unnerve many golfers at the start, including a free swinging George Bush who scattered fans and secret service agents with a wild drive on the right side during a mid-1990s visit.

The par 3 second hole is another classic Tillinghast touch as the hole is almost totally surrounded by trees. There is a deep depression and several bunkers in front of the green, which will greatly penalize any shot, which comes up short. Any tee ball over the green will find thick rough and out-of-bounds for the long hitter. While the distance is listed at only 175 yards from the back markers, there is plenty of danger on this waterless layout.

The par 4 third hole rolls gently downhill at 456 yards from the back tees with out-of-bounds all along the right side. There are more bunkers in the landing area and near the green with more rough and trees along the left.

Water comes into play for the first time on the par 4 sixth, which at 353 yards from the back tees might seem simple enough, but players must gauge the distance of their drives as they can easily see a well struck tee ball find the water. The green also slopes back to the water, meaning any approach shot not hit hard enough stands the chance of hitting the green and spinning back in the water or dense rough.

The par 4 8th is another traditional Tillinghast touch, the drivable par 4. At only 309 yards from the back markers, 275 yards from the middle tees, golfers are sorely tempted to go for the green with one mighty tee shot, but the sloping fairway left, which is guarded by trees along the left side and deep bunkers, levy a stiff penalty on anyone who comes up short.

Both the 9th and 18th holes are par 3s, another unique twist rarely seen in modern golf course architecture.

The 9th, which plays 155 yards from the back tees, slopes sharply downward at the tee to a small lake, then upward to a green surrounded on all sides by deep bunkers. The 18th is 198 yards with an uphill approach to a smallish green.

While the two finishing holes may seem simple, more championships, bets, titles and bragging rights have been decided on these two short pieces of property than just about anywhere else in town. Golfers looking for a quick and successful end to their nines can quickly find themselves with a big score and a bad mood in a hurry.

The back nine is more of the same simple, classic time-tested Tillinghast design. The par 4 12th has been named one of America's Great Golf Holes by the United States Golf Association for its sloping fairway and green against a small pond and deep bunkers.

Oak Hills was originally known as Alamo Country Club when it opened in 1922, but fell on hard times during the Great Depression and was briefly closed. It was reopened in 1946, but its classic style and design has never gone out of business and never gone out of style.

This is one Texas golf classic which has more than stood the test of time, and endured for a new set of golfers in a new century. 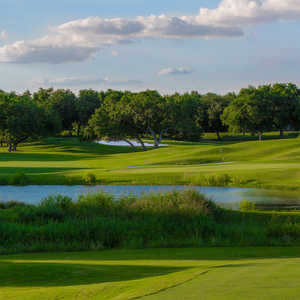