A find in the forest of east Texas: The new golf course at Rayburn Country in Brookeland

BROOKELAND, Texas -- If you just happen to be deep in the pine forests of east Texas near the Louisiana border, there are two things that might interest you for recreation -- tremendous bass fishing on the Sam Rayburn Reservoir and a true hidden gem of a golf course just a few miles east of the lake called Rayburn Country.

Redone by Randy Russell, Rayburn Country, located in east Texas, is well worth the drive.
«

The course, unknown to most Texans, is about two and a half hours from Houston and Shreveport, La., about an hour or so from Beaumont and Lake Charles, La., and about four hours from Dallas. In other words, the middle of nowhere. So the question would be, perhaps, why would anyone make such a journey just to play one golf course?

The answer is that after a renovation, a new clubhouse and the sheer solitude of the experience, it's worth it for the avid golfer. There's not much else to do except play golf and fish (and hunt if you're so inclined), but Rayburn Country does have a modest 50-room lodge, good food and offers very reasonable packages -- ideal for a buddy trip.

The bottom line, though, is the course. And yes, it's that good after architect Randy Russell headed up a $3.2 million renovation on two of the three nines at Rayburn Country.

The routing at Rayburn Country, originally built in 1968, was always solid, although a bit unusual. All three nines were designed by name architects -- Robert Trent Jones Sr., Jay Riviere and Robert von Hagge.

Only the Jones and Riviere courses were renovated, though the von Hagge course is still open and does receive play. As GM and head pro Paul Calame explains it, the von Hagge Course is "traditional golf" with narrow fairways. "It's a beautiful course," he said, "but doesn't offer the wider fairways of (the redone) course. You probably won't want to hit a driver very often on it."

On the new and improved course, the Jones design is the front nine, while the Riviere layout is the back. They blend together well through 150 feet of elevation change, though if you look hard enough, you can see some differences in the architectural style. After Russell got through with it, that would be difficult for the casual observer.

One of the biggest design changes Russell brought to the table was the bunkering. He added a few more to the layouts, but more importantly, he incorporated smaller, more jagged-edge type bunkers with depth. Get in them, and it's more than likely at least a one-stroke penalty.

The greens complexes are also interesting, varying in size with plenty of levels and places to hide pins. Finding the right level is paramount to scoring, as is missing on the correct side so you have some green to work with. Short-siding one's self is a recipe for bogey or worse.

As for the best holes, there's not one on the course that's blah. Starting with the first, a reachable par 5 if you play the correct tees, and ending with a 461-yard par 4 that plays slightly uphill off the tee down a corridor of forest. The green is well-guarded by bunkers making it a difficult finishing hole. It's the No. 2 handicap, right behind the seventh, a difficult dogleg right par-4 that tips out at 477 yards. The course also offers a nice variety of par 3s with no two remotely alike.

Though the fairways are generous throughout, you can't spray it at Rayburn Country as the forest that lines most of the holes is thick and unforgiving. Fortunately, most of it is marked as hazards, so at least you're not re-teeing every time you lose a ball in the woods.

And although the course is just 6,776 yards from the back tees, it plays longer than its yardage. (Rayburn Country now hosts an Adams Tour event.) The lush fairways don't roll out like many others do in the summer. And on many holes, placement is more important than length anyway. There are three other sets of tees, as well, playing as short as 5,289 yards.

Calling Rayburn Country a resort might be a bit of a stretch, but the accommodations are comfortable and the golf is excellent, undoubtedly one of the better courses in the whole state. On top of that, the new owners, headed up by Beaumont, Texas attorney Walter Umphrey built a $4 million clubhouse that doesn't disappoint. Inside, there's a terrific dining room, great bar and nice golf shop.

Outside, golfers can relax on a large stone deck around a fire pit, overlooking the course's massive green and beautiful ninth hole, perfect for a cocktail and cigar. In addition, there's also a driving range, and if you need a lesson, Calame, a PGA member, can help you out in that department as well.

Combining this with a fishing trip would be the ultimate guys getaway, but even for the golf, it's well worth it, and you'll like the prices, too. Green fees are very reasonable (less than $50 most of the time), and Rayburn Country offers stay-and-play golf packages that are hard to beat 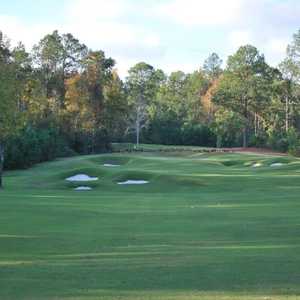