Under new management, The Falls Resort in New Ulm returns to glory

NEW ULM, Texas -- When you drive out to The Falls Resort, your first clue that you're almost there is that you lose your cell phone signal. That's a good sign, because if you're looking to escape the hectic life of the city, The Falls is your ticket, and has been for some three decades.

Taking a day trip to The Falls Resort, located just outside Houston, is an escape from the city.
«

Located a little less than two hours from downtown Houston, Austin and a little more than that from San Antonio, The Falls, which is one of the late Jay Riviere's finest designs, really is a respite from people's everyday busy lives. Although you might be able to get a cell phone signal on a few holes, most of what you will hear is the whacking of a tee shot, the chirping of birds, the rustling of deer and the calming sound of water trickling between holes and below greens, which is how the course got its name when it opened in 1984.

Riviere, who was from the area, laid out the course with the late Dave Marr, who won the 1965 PGA Championship. Riviere, who had a house on the property, turned The Falls into one of his very best works, creating a course that matched the terrain to near perfection.

Unlike the typical Houston golf course, this 6,765-yard championship layout is anything but flat. While it would be a stretch to call it hilly, there are elevated greens, lots of twisted doglegs through oak and pine trees and plenty of undulation on the greens -- plenty. At The Falls, course management isn't just a cliche, it's necessary. Driver is appropriate on many holes, like the good risk-reward par 5s, but on some of the short par 4s, positioning is what's most important, especially when there's a water hazard at the end of the fairway or a short dogleg.

The Falls Resort: Back to glory

As good as the layout is, however, it would be nothing without good conditioning and customer service. That part of the equation started to suffer in the late '90s and the turn of the century. But in the past year, as Troon Golf took over the management of the course, it's been solved.

"Not to disparage the former management company, but Troon believes in putting money back in the golf course," said Director of Golf Steve Patton. "You couple that with great customer service, and you've got a great product."

Indeed, the experience at The Falls is enjoyable once again. It starts with a welcoming staff and well-stocked golf shop, spills over into the expanded food and beverage service and concludes with some reasonable and comfortable stay-and-play packages, perfect for weekend getaways.

The star, however, remains the golf course, especially if it's in good condition. There are no two holes alike and there are several candidates for signature holes. Water comes into play on half the holes, and some of the bunkering and greens complexes are unlike anything you'll see in the area.

The sixth, for example, is a medium length par 4 that doglegs right. The approach is over water to a highly elevated green, protected by tiers of sand and grass bunkers. The seventh, the course's No. 1 handicap hole, follows. With water and the end of the fairway, a troublesome tree can play havoc with the approach shot to a green fronted by a lake. Shot shaping is necessary at The Falls.

And even though the course is just less than 7,000 yards from the longest of five sets of tees (there is a set for juniors and beginners at 4,654 yards), you can't overpower it. The sloping greens, water hazards and doglegs ensure that.

The Falls Resort: The verdict

With conditioning back to where it was in its better years, The Falls Resort represents a perfect weekend getaway or day trip from the city, whether it's Houston, San Antonio or Austin.

Stay-and-play packages start as little as $80 a night (double occupancy) and include green fees. There are ample practice facilities and the food and beverage service -- highlighted by the Cascades Restaurant -- is more than sufficient.

The accommodations have also been upgraded, especially the villas, which can sleep four or more people. It's also a good place to work on your game with lessons available from the staff and good practice facilities. 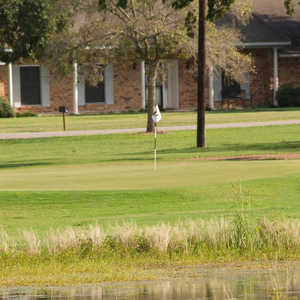