Texas Golf in the Big Country is worth finding

ABILENE, Texas -- When the Good Lord created Northwest Texas, He didn't spend a lot of time on outward appearances and He didn't leave much for golf in this desolate, unforgiving place. Pump jacks nod rhythmically across the crusty prairie, sucking oil out of one of the largest reserves in the world, and tumbleweeds and dust storms blow through, slamming screen doors and sending newspapers and hamburger wrappers skittering down the empty streets. Yet there's always hope for the restless golfer in search of fairways and greens.

Wichita Falls, which had the dubious distinction of being named "Most Average City in America" by Advertising Age in 2000, and Abilene serve as hub cities, both with populations around 140,000 and plenty of affordable golf.

Not counting those two mighty metropolises, the average population of the 38 golf towns is well under 10,000. Out here you can find 18 holes with a cart, hamburger, chips, a drink, and entry into the nightly scramble for $17.50. Out here away from the traffic and congestion you can get away from it all and work on your golf game.

Venturing north into the Big Country out of Abilene, US 287 first takes you to the tiny town of Hawley. In the past, there was never a reason for the avid golfer to stop off in this metropolis of almost 600. However now that a first-class 18-hole golf course has been carved out of the mesquite and oak trees, hackers no longer pass through on their way to the secluded rural golf courses just up the road in Anson, Hamlin, and beyond.

Former Haskell Country Club superintendent Mark Bailey and his wife Gayle first broke ground for this course northeast of Hawley on New Year's Day, 1996. Two and half years later, the original nine holes opened. Construction on the next nine wrapped up in 2002, leaving 18 outstanding holes for the public.

Tangle Oaks is an appropriate name. The course is carved out of an extremely dense oak thicket, sometimes referred to as "the shinnery." In fact, the shinnery is so thick that it's played as a lateral hazard- players just drop from where the ball went into the briar-patch-like rough. Length is not imperative, but accuracy is key. The greens are elevated, tilt from back to front, and have a medium to high slope.

The fairways are quite tight, due to the oaks. The strategy is simple. Keep it straight or you'll get in trouble. Length is not important, but accuracy is a must. The back nine is especially tough off the tee - very tight and loaded with doglegs.

The signature hole is No. 9, a 383-yard par-4 hole that plays into the teeth of the stiff west Texas wind. To further a golfer's sheer terror, the green is completely fronted by water and a formidable retaining wall. On the back the most notable hole is No. 13, which features an island green. Hole 18 is unique because of the split fairway.

Make sure you call the course for detailed directions, as they may be able to give you a better feel for finding this out-of-the-way locale. And while the county is dry, Tangle Oaks allows you to bring your own beer. Post-round if time permits, order yourself a chicken-fried steak from Debbie's Diner downtown.

Rotan is noted as the home of Slingin' Sam Baugh, the greatest quarterback ever to play the game and the man who led TCU to the national title in 1935. Baugh lives on a ranch outside of town and plays golf frequently at the RGC, which is located in the city park and maintained by 12 volunteers who pay $100 per year for golf privileges.

Larry Hamlin, age 62, who caddied at the course as a youngster and is now one of the volunteers who helps keep the course in working condition, said it best: "My father is 87 years old, and there's another fella that's 92, and they both still play. These old-timers brought in a dump truck and filled up the water hazards. Then they had the city come out and cut down the trees that were in the way. We had one bunker but they filled that in, too."

Unlike other nearby courses that are owned by the county and have an easier time funding the maintenance of their golf course (like Kent County GC in Jayton), Rotan's course is owned by the city. There is no pro shop and there are no carts. However in the old days, locals used their cars in place of carts, and one member actually backed his "cart" into a tree. These days, members ride their carts from their homes to the course.

The green fee is $5, enforced by the Golf Gods. The small Bermuda greens are watered by hand, although the club is considering the installation of sprinkler heads around the greens. Hole No. 3 is the signature hole, a par-4 highlighted by an approach shot over a "ditch" to a small green.

As you drive into Seymour the large farms and ranches are golden with wheat ready for harvest in spring, and loaded with grazing cattle in the fall and winter. In the summer temperatures soar, and the town is known for recording Texas' hottest temperature (120 degrees in 1936). A ranching community with murals depicting the town's history in the heart of downtown, golfers traveling this part of the Big Country should make it a point to stop off in this charming town for hacks at the Salt Fork River Golf Course.

Like so many other courses in this region, Salt Fork is a wide-open nine-hole course with minimal hazards. One pond impacts the short par-3 No. 3, which completes the trifecta of the three easiest holes on the course. Nos. 1 & 2 are both par-4 holes that play less than 300 yards. This somewhat hilly course features medium-sized, elevated greens that have severe undulations. No. 5, the most difficult hole, has one of those surfaces, an unwelcome site when you're staring at a longish approach over a creek to the green.

One of the most surprising golf stops rests in the river valley below Throckmorton Reservoir, once the site of a well-known campground on the old road west to California as well as a Comanche Indian reservation from 1854-1859.

Built around 1970, this friendly little nine-holer features mesquite trees and a creek that runs throughout the layout. Four more ponds make water the predominant hazard, and a few of the greens are elevated.

No. 1 might be the most interesting hole, offering a nice view of the lake off the box and teeing down along the left side of the dam to the green about 320 yards below. With the wind coming off the lake you have the chance to get it on the green for a putt at eagle. No. 8 is a tough par-4, playing 410 yards straightaway, however there's not much to the fairways here so expect the ball to roll farther than normal on the hardpan surface.

The ranch town of Albany, the county seat of Shackelford County and an early supply point on the western trail to Dodge City, grew into an oil drilling and supply center with the discovery of the Cook oil field in 1926. Despite the oil, the town slogan has been "Albany, the Home of the Hereford" since the cow was first introduced to the state here in the 1920s.

Along with panoramic views of the hills to the north and east of town, Albany's nine-hole track offers a great opportunity for simple, small-town golf. The course is wide open and has minimal hazards, but the best feature is the impressive condition of the course, making it evident that the staff works hard to make it one of the best small tracks in the region. The greens and tee boxes are in good condition. And while the fairways are by no means of championship quality, they get the job done and offer good lies to those who find the fairway.

This course is fun for the average hacker. The terrain is flat, and mature trees line the fairways. There are no bunkers and only four water hazards impact play. The feature hole is No. 5, a 437-yard par-5 tester that involves an uphill tee shot into a dogleg right fairway.

Plan your rounds at Albany for the late afternoon-early evening because the sunsets are impressive and make for good views of the most spectacular courthouse in the state, the Shackelford County Courthouse , which is on the way to Texas' best small-town steakhouse, the Fort Griffin General Merchandise Co. (325-762-3034). In addition to steak, the menu includes oysters and mesquite-grilled red snapper -- the perfect way to wrap up a long day of Big Country golf. 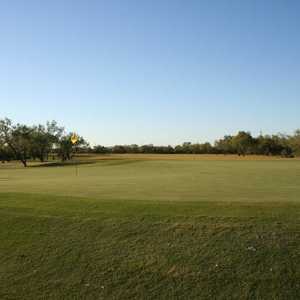