THE COLONY, Texas - When the New Course opens in late summer or fall at The Tribute, it'll make you think old, not new, as in the old golf courses of the United States.

Bunkering was a point of emphasis in the design of the New Course at The Tribute.
«

There is already a Scottish links-inspired "Old Course" at The Tribute, so quite naturally this one had to be called the New Course - as in the New World, as this continent was once known.

The Old Course, which is open to the public, is a Tripp Davis-designed collection of holes directly inspired by specific holes from the courses in the British Open rotation. The New Course is inspired by the great American architects of the golden age of golf design. The holes themselves don't necessarily resemble specific holes. Instead you'll find features throughout the course that reflect the styles of classic architects like Charles Blair Macdonald, Donald Ross, Seth Raynor, Alister MacKenzie and A.W. Tillinghast.

The New Course is a collaboration between Oklahoma-based Davis and PGA Tour player and former British Open winner Justin Leonard. It's the first Texas-based project for Leonard, who lives in the Dallas area, and the second he has done with Davis. The two teamed up to design Shorefox Golf Club in Granby, Colo., which has yet to open.

One aspect of the course that is obviously early 20th century is the bunkering.

"The one thing to understand about bunkers from early American golf courses is that they are a lot different than what we see today," said Davis, also an accomplished amateur player who was a star at the University of Oklahoma. "Most of those golf courses didn't go to the extent that we do today to maintain bunkers.

"You see old pictures from the late teens and '20s - these were very informal ragged edged bunkers," Davis continued. "If you didn't grow grass on the face or it was sparse, that was the way it was left. Today we go to great lengths to irrigate it separately so we can maintain turf, we put liners in bunkers and so forth. If you were to look at a bunker we did and say it was influenced by Tillinghast, you'd really have to go back and look at some pictures from the '20s to see the same style."

In all, there are about 180,000 square feet of bunkers, about triple what you would find at a typical golf course, Davis said.

As far as which classic architect most influenced the design, Davis said he didn't keep tabs.

"Strategically, I would say we were thinking of Ross and Tillinghast more than anybody. On the bunker style, it tended to cover the entire gamut," he said. "There are some bunkers out there that have a Raynor feel to them, a lot more of them have more of a burly Tillinghast look to it. It was really bringing it all together. We didn't really say this would be our Raynor Bunker or a Tillinghast bunker. I would say, though, that there is as much Tillinghast, Ross and Maxwell in the greens more than any other architect. "

Davis said Leonard's involvement is much more than token, as it might be with some tour players who put their names on golf course projects. Leonard's input from all the great courses he has played was invaluable. For example, on the par-5 14th at The Tribute's New Course, Leonard suggested that the 10th green at Pinehurst would be a perfect fit for the hole.

"This needs to be something that you love doing," Davis explained. " Instead of looking at it as a paycheck, you need to look at it as a legacy of something you want to leave behind. He [Leonard] has followed though with that and then some."

Davis said that when they worked together on the Shorefox project, Leonard was still pretty green when it came to golf course design and construction. That project served as an education.

"We probably met a dozen times before we broke ground. I didn't keep tabs on how many times Justin came out, but I'd bet it was another dozen times during construction," Davis said. "It's about what you're getting from Crenshaw and heads and shoulders above most of the other guys." 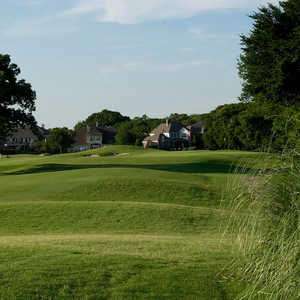