Buckle up for best tests of West Texas

MIDLAND, Texas -- West Texas wanderings in this windswept region of the state lead to some links offerings worth reporting on. Midland and San Angelo are home to two of the Lone Star State's toughest tracks, and the trip back to Dallas involved a surprising discovery.

The concrete jungles of Texas have their fair share of quality golf, and there are definitely plenty of places to play, but the open roads and flat lands of West Texas are where Lone Star golf takes on a different feel. In fact both golf and traveling in Texas embrace the Zen-like notion that the journey itself, rather than the destination, is the thing. In this spirit we threw our citified golf expectations out the window and went in search of Texas' most diabolical golf courses.

Located about an hour west of the state's epicenter, San Angelo is surprisingly close to many spots in Texas. The drive from Dallas involves a high-speed jaunt down I-20 to Abilene, followed by a scenic slide south down 277 over the Colorado River, through Bronte, and on down to the Concho City where you'll run into the impressive Quicksand Golf Club on the north side of town.

Nestled next to the Concho River, Quicksand is named appropriately with its combination of desert and links-style architecture, and its prominent use of sand (almost 100 bunkers). Five sets of tees, ranging from 5,023 to 7,171 yards, give West Texas hackers lots of options on this immensely entertaining course.

Nos. 5 and 7 are the holes of note on the front side -- the fifth known for its elevated island green (surrounded by sand, not water), and the seventh famous as the toughest hole on the course. The signature No. 7 rolls 621 yards and has the always-pleasing double dogleg feature, and is only lined by 22 bunkers. Yes, 22 bunkers!

The back features three very difficult finishing holes. No. 16 involves an approach over water to a tiny green, while No. 17 requires a 200-yard carry over water. The final hole is a long par-4 that features a tee shot into a fairway lined by water on the left, then a difficult approach into another island-like green, this time surrounded by water.

When asked how Quicksand compared in difficulty to other West Texas tracks, General Manager Jared Cooper used Midland Country Club as a logical basis for comparison: "I used to think Midland Country Club was difficult until they moved the Buy.com tour event there from Odessa's Mission Dorado course. Those guys had no problems, throwing down low 60s without even thinking about it."

In fact if there's such a thing as a "good pain," Quicksand offers it. At first glance the course appears diabolical and intimidating, but once you get used to the Sahara-desert-like feel on hole after hole, start enjoying the superb conditions, and generally play your game, you'll find that the pain Quicksand induces is a good sort of pain. It's like a wild roller coaster that leaves you drooling for more once the ride is finished. Aside from the layout, the most addictive feature is the greens, which are so pure and in such pristine condition that you'll have the exhilarating sensation that every putt is going to roll in - no matter how bad you usually tend to butcher with the flat stick.

Just 34 miles north lay the unknown golf destination of Robert Lee, Texas (elevation 1,780, population 1,134), home to one helluva nine-hole track that routes around its namesake Mountain Creek. Set in the scenic hills of central Coke County and sandwiched around Highway 158, the 2,859-yard, nine-hole Mountain Creek Golf Club is good as they come out this way, and loaded with character thanks to a very clever design with numerous "signature hole" candidates and immaculate, dome-shaped bent greens.

After sliding your green fee in the slot on the clubhouse door, turn around and pay particular attention to the view of the opening and closing holes, both of which force carries over a deep ravine that has been cut by the creek. The par 4 No. 1 is a birdie opportunity because of its 287-yard length, but beware of the blind tee shot and the extremely small, mounded green. No. 9 is a great finishing hole that requires an 8- or 9-iron over the ravine to another small, elevated surface. Anything short or off line is history.

In between the route is awesome all the way, highlighted by one of the most difficult tee shots in Texas on the 307-yard No. 6. This is followed by the semi-circled No. 1 handicap hole, the seventh, which plays a deceptively long 482 yards. But the tee shot on the 6th hole deserves more acclaim. At first glance it looks like you're hitting directly into one of the most massive pecan trees in Texas. Aim right toward the other huge tree and the No. 5 fairway, then envision a draw or even a hook -- it's the only way you'll find the firm, flat fairway. Along with the clear, bass-holding pools that dot the creek, the old pecan is the signature of this charming track.

Courses like Mountain Creek have more character than big-city traditional courses, and they are especially difficult if you're not used to playing them. Because the course isn't perfectly manicured, you hit whatever shot is required instead of the shot you want. Much like the European golfer who accepts the winds as something that intensifies the flavor of the game, the golfer who finds himself on a rural West Texas nine-holer must accept and deal with his surroundings.

Post-round, the low-slung hills between San Angelo and Midland are especially appealing just after sundown, when the stars explode above the horizon and the talk turns to the Tall City's oldest golf course, Midland Country Club. Architect Ralph Plummer must have been caught in some sort of oil-patch pissing match in the midst of macho oilmen when his ego prompted him to create his 7,300-yard-plus monstrosity in an area that is often bombarded with 30-40 mph winds!

On hole after hole, golfers face long, narrow fairways lined with mature trees and the famous, rattlesnake-infested mesquite "jungles" that suck golf balls out of the West Texas wind. Crushed drives that find the fairway don't necessarily warrant pats on the back, as a long iron or even a 3-wood off the deck awaits the over-confident hack on his approach. Water comes into play in strategic places (seven holes), wreaking havoc on the round. The bent-grass greens are large and sometimes impossible to handle because of their speed.

Every hole is impressive, but the 601-yard No. 15 stands out as it snakes its way into the wind right off the tee, then left for the second shot, and finally back to the right again into a massive, bowl-shaped, elevated green. Tiger Woods could not reach this hole in two, and you'll be ready for a cold one when you're done at MCC.

Extended road time often stirs debate, and the drive back through Abilene inevitably brought up the topic of the most difficult Texas tracks, inspiring a last-minute detour north through the charming towns of Albany and Breckenridge on the way to the Possum Kingdom lake course called The Cliffs. Here the question would be answered once and for all. Which is more difficult: Quicksand, Mountain Creek, Midland Country Club, or The Cliffs?

In some respects playing a round at The Cliffs "cold" is unfair, because the uninformed golfer who has never seen the course has no idea how to handle the "18 signature holes" that feature numerous blind shots, 100-foot elevation changes, massive rock outcroppings, ridiculous carries, and an infinite number of ways to destroy your round.

No. 3 serves up the first of many almost impossible shots for the average handicapper, forcing a 190-yard-plus carry of a deep hill countryesque ravine into a green that measures only 30x30 feet. You'll find yourself getting used to the torture until you roll into No. 8, when the insanity is taken to another level. This one steers you to the lake by bending sharply to the right around another deep canyon, practically taking you in a semi-circle for 555 yards. The only hope is to lay up around and over the corner of the ravine, which results in a 150-200-yard poke into swirling lakeside winds and a cliffside green that's only 13 yards wide!

The ride continues on the back, with No. 14 rolling 416 yards into a severely sloping fairway, followed by an outrageously long approach over another oak- and cedar-infested ravine. Next, the signature of signatures is the terrifying No. 15, a dicey par-3 that drops 100 feet over a cliff down to a miniscule green that is surrounded by the cliff wall to the left, water on the right, and a tiny bail-out area in the front.

It's safe to say that you should suspend your expectations when "enjoying" The Cliffs, because it's a totally different golf experience. Limping off the 18th green and wondering what the hell just happened, it was clear that out of 63 weekend golf holes, the most difficult and intense experience hands down occurred during the 4-5 hour round on the rugged slopes of Possum Kingdom lake. 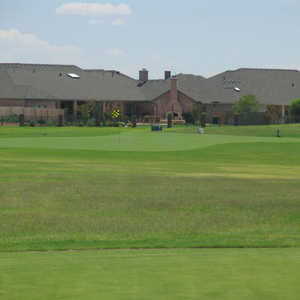 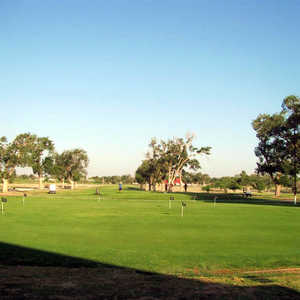