The Woodlands just managed to get even better

THE WOODLANDS, Texas -- Texans like their bragging rights. From the size of the ranches to the hair on the women, the saying goes that everything is bigger in Texas. When it comes to golf, nothing is bigger or more worth bragging about than The Woodlands.

Start with a Tournament Players Course that hosted a PGA Tour stop for 17 years and then toss in private courses designed by Jack Nicklaus, Gary Player and Arnold Palmer, with yet another on the way from Tom Fazio. Wrap all that around a 4-star resort and conference center and you have a golf destination unsurpassed in Texas.

And yet, The Woodlands just managed to get even better.

Visitors can choose from the renowned TPC Course, former home of the Shell Houston Open and new site of the Samsung World Championship LPGA event, or the subtle elegance of the new Panther Trail course. Either way, guests will find they can't go wrong.

The Florida-based architecture firm of Roy Case was hired for the $3.5 million renovation and given two basic directives: make it a more friendly resort course for speedier play and give it an island green on the 18th for a lasting memory.

"We got a lot more than we expected," said Bill "Goose" Munguia, director of golf operations. "It's just an outstanding course from beginning to end."

On my recent visit to the resort, I first played the TPC course and halfway into the round, I asked Munguia which course he preferred. When he answered "Panther Trail," I took it with a grain of salt, figuring he was simply hyping the new course like any good director of golf would do.

After playing Panther Trace the next day, I realized the hype was justified. The TPC is a splendidly wicked course with the sex appeal of having hosted the world's best players at the Shell Houston Open for 17 years, but for the average golfer, Panther Trail is a smoother, more enjoyable track.

Formerly called The Pines, the course has always had a secluded feel because of the towering trees that dominate this part of the south Texas landscape.

Case added to the seclusion by converting large stretches of groomed rough areas into stunning patches of native grasses and wildflowers. A color palate once dominated by dark green is now enlivened with shades of tan and sprinkled with yellows, blues and reds. Only seven or eight of the holes were radically redesigned, but the rye grasses and newly sculpted fairways give the entire layout an all-new feel.

In keeping with his marching orders, Case softened the course by reducing the number of bunkers to 50 from 97 and enlarged several of the greens. Pace of play is improved, but Panther Trail still has sharp claws that can bloody any scorecard. Its four sets of tees range from 7,044 yards to 5,614 yards with slope ratings from 130 to 118.

Then there is the 18th. A daunting par-4 that plays as long as 429 yards requiring a long carry over water to the island green.

"We've got a new local rule that non-members get to hit tee shots until they find the fairway," said Munguia, "because it just wouldn't be fair to not get a crack at the green with your second shot."

The 18th may be the most dramatic, but the best hole is 15. A sumptuous par 4 whose split, multi-level fairway doglegs sharply to the left. The split fairway presents a multitude of head-scratching club choices on the tee. As for the TPC, even though the Shell Houston Open migrated across town last year, the course still possess plenty of pizazz. Anyone who follows pro golf will recognize the 17th and 18th holes as two of the most exciting finishing holes on the planet. Both are par-4s with water looming first on the left and then on the right. Fans will see those holes on television in October when 20 of the world's best women golfers will compete for the Samsung World Championship.

The course, a Von Hagge-Devlin design, is just plain brutal. In fact, playing from the middle, or mortal, tees just might be the toughest 6,295 yards a golfer could ever find. Any errant shot is sure to find tree, sand or water.

The thrill ride of TPC is the perfect complement to the smooth cruise on the new Panther Trail. Smart visitors will leave themselves time for both.

Back at the resort, it's all luxurious fun and games. The centerpiece is the swim center that features a pair of twisting 38-foot water slides, along with areas for water basketball and volleyball. Young swimmers can do their best Jacques Cousteau impersonations by searching for underwater figures while the music of Walt Disney's Little Mermaid soundtrack is piped in underwater. There is also Puffy's Sprayground with computer-controlled water spouts and fountains and a zero-grade entry pool for toddlers.

Kid-less adults need not worry. There is a separate large pool for guests 18 and over with a Texas-sized hot tub. The waterplex and the attentive wait staff at the pool-side café kept my wife and three kids entertained for hours.

And if you find yourself forced to mix business with your pleasure, the Woodlands Resort is well-equipped.

With five restaurants, a full-service spa and salon and two fitness facilities, guests will never need to leave the resort, but there are attractions nearby if they choose. No one does urban sprawl better than Texas so even though The Woodlands is 30 miles north of Houston (18 miles from the international airport), there is a large shopping mall, movie theaters and numerous excellent restaurants within a short drive. And if shooting for bargains is almost as much as fun as shooting low scores, avid shoppers will love the Conroe Outlet Center with dozens of stores from manufacturers such as Nike and Levis. It's a 15-minute drive north on Interstate 45.

The Woodlands isn't so much Deep in the Heart of Texas, as it is Deep in the Gut of the Lone Star State. Some 27 miles north of downtown Houston, The Woodlands is a master planned community of a size and scope that only a Texan could have dared to undertake it. That Texan was George Mitchell, who in the early 1970s bought 27,000 acres (some 25 percent larger than Manhattan Island) of densely wooded land just off Interstate 45 with a vision of creating a master-planned commercial, residential community. The Woodlands opened in 1973 and it continues to grow today.

It has a population of 70,0000 and ranks fifth in the nation for new home sales in a master-planned community. The Carlton Woods gated community and private club boast the Nicklaus signature course and will soon break ground on Fazio's new design. Carlton Woods will be the only private club in the country with both courses by both legendary designers. 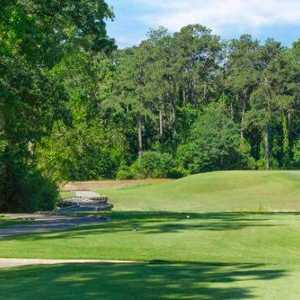 Panther Trail Course at The Golf Trails of The Woodlands
The Woodlands, TX
Details Book from $40 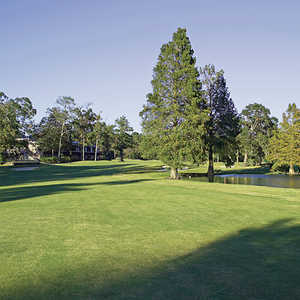 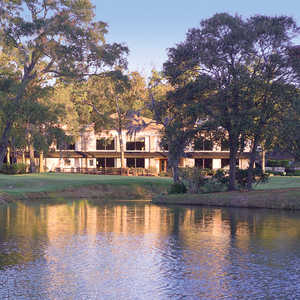