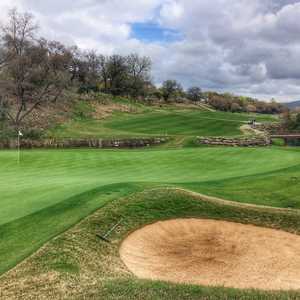 Back around 1900, when the greater Austin area was only home to about 25,000 residents, Harvard Law School graduate and lifetime Austinite Lewis Hancock organized one of Texas’ first formal country clubs, the venerable Austin Country Club.
The first nine-hole course, now known as Hancock Park, featured sand greens and a tiny two-room framed clubhouse. The club stayed put for half a century, noted for the presence of Harvey Penick. Then after a huge local debate, the facility was moved to Riverside Drive in East Austin. From there it made it another 35 years before moving to its current Davenport Ranch location.

The current ACC layout, designed by Pete Dye, rests on the shores of Lake Austin and the Colorado River. Dye didn’t veer from his usual method of creating an impressively difficult track using his trademark railroad ties, deep pot bunkers, and huge undulations.

The back nine features many outstanding holes, including the 446-yard No. 11, which deceptively doglegs left along a canyon before requiring an approach over that same deep ravine. The par 3 No. 16 also stands out, featuring a long carry over another canyon.