"Throughout the round I kept bending Couples ear about our No. 18 hole," Cleboski remembered. "It's considered one of the toughest finishing holes in Texas and I've always been proud of that. Well, he hits one of his power fades that lands in the middle of the fairway, then hits a wedge to the green and two putts for par. As he walked off the green he said: 'Yeah, it's a nice hole.'"

Well, you can bet No. 18 is not a driver and wedge for double-digit handicappers. If the wind is gusting in your face, and you survive the huge pines framing the fairway on the left and right, the average player is going to layup short of the large water hazard that fronts the green. Then he's just going to hope to chip up close and one putt. That's not easy, considering the green is now 10,000-square feet.

Thank Cleboski and the Jack Nicklaus design group for making the 456-yard par-4 No. 18 even more of a challenge.

"I wanted the water to come in to play more," Cleboski said. "So we had Nicklaus' design group out one day and we asked their opinion. They told us to double the size of the green -- we did that and added mounding in the back which is great for spectators during tournaments. With certain pin placements it is a tough, tough hole. And when the prevailing south wind is blowing it plays more like 490."

Cleboski took a road less traveled to end up as a golf pro. He graduated from St. Thomas High School in Houston where he excelled as a right-handed pitcher. A stint with the old Milwaukee Braves organization ended with a blown-out arm. When he came back home he started a long career in law enforcement. But golf was always there, too. He excelled at golf, and when he retired at age 50 from the Houston Police Department, he tried the mini-tour and moved to Del Lago.

Eventually, eight years ago, Del Lago asked him to run the golf operation. It was a good golf course, but Cleboski was determined to make it very good. He would lie in bed thinking of ways to improve it. And those dreams usually turned into a change in the original layout with the help of Executive Director Lawrence Barbir. The original layout was put together in an unbelievable eight months by Dave Marr and Jay Riviere.

Now Del Lago, at 6,794 yards, features pine and white oak tree-lined fairways, cascading waterfalls, bubbling fountains, an island tee box, 11 lakes and more than 50 bunkers. And the length will be about 7,100 yards once another Cleboski dream comes true soon. The new, longer tee boxes are already there, they just have to mature and be fine-tuned into the design.

Open year-round, Del Lago Golf Resort and Conference Center, is a 300-acre self-contained retreat nestled on the shores of 22,000-acre Lake Conroe. Del Lago has it all -- water sports, 300-slip marina with boat rentals and fishing trips, 11 lighted tennis courts, conference facilities, a 21-story hotel tower with awesome views of the lake and golf cottages which line the ninth fairway.

The sixth hole is one of south Texas' most beautiful. The par-4, 458-yarder from the tips, features an approach shot over water. A three-tiered waterfall catches your attention on the left, complete with a replica of the Ogal Led Bridge at the Old Course at St. Andrews, leading you over the Swilken Burn -- just another one of Cleboski's visions after attending the 1995 British Open.

How tough can Del Lago be? "It's all about pin placements," Cleboski said. "After one tournament group finished one year they told me they really liked the golf course, but that it was too easy. They wanted to come back the next year and asked me to toughen it up. Well, after a day of playing my tougher pin placements they were begging for me to change it back," he said.

Del Lago now hosts about 42,000 rounds a year and an overseeding program, implemented two winters ago, has really added to its all-year long playability.

"The course is much more plush because of the overseeding," Cleboski said. "But it also adds some length. Your drive won't roll forever anymore, but most players really think the golf course is more lush."

Del Lago's Accommodations: Every oversized room in the 310-room all-suite tower features breathtaking panoramic views of Lake Conroe which guests can enjoy from their private balconies. There are 35 golf cottages and 13 lakeside villas.

Del Lago's Dining: The Grandstand Sports Bar & Upper Deck is unlike any place you've ever seen. Rick Fitzpatrick's sports murals include Golf Rushmore, with the faces of Nicklaus, Ben Hogan and Arnold Palmer. There's an empty face which will be filled from a vote of golfers who visit Del Lago. From Nicklaus' nose to the top of the mural is eight feet.

You can sit here for hours trying to name the hidden celebrities in the two-story-high sports murals, see the skyline of every NFL city, view the sportscasters from every era of ABC's Monday Night football, jump into the roped-in boxing ring, watch countless plays on televisions at every angle or enjoy sports-inspired food and drink.

Fitzpatrick also painted the murals of the Kiva Southwest Family Table Restaurant and you can sit for hours trying to find the hidden gems he has placed into the murals with Albuquerque-styled southwest-indian culture themes. If you look closely you will find eagles soaring and coyotes howling.

P.G.A. Pizza offers evening delivery from Del Lago's pro shop grill, which also serves breakfast and lunch. Call your order in ahead of time from your suite or on the 9th and 17th tee boxes. 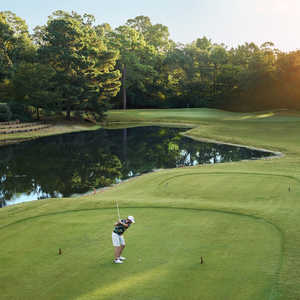 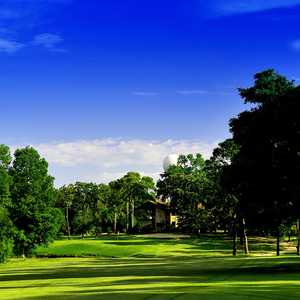 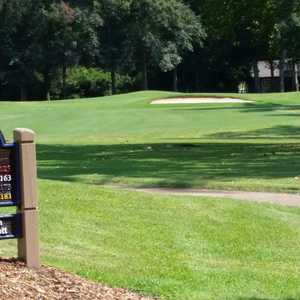