Butler Pitch and Putt in Austin: Murder in the clubhouse, fun on the golf course

AUSTIN, Texas -- In the 1940s on a piece of land located south of the Colorado River and the city of Austin, the Butler Brick Company operated a prosperous clay mine.

Since that time, the mine has closed and the land has gone through a transformation. Today, the property is considered an Austin landmark that is full of stories of sex, murder and, oh yeah, an occasional hole-in-one.

After years of mining clay on the small piece of land, Butler Brick closed down the mine in the late 1940s and turned the property over to the city of Austin. The land was in bad shape. The city of Austin had two choices - clean up the land or leave it in its poor condition. The city opted for the latter.

Kinser had an idea. He wanted to build a nine-hole, par-3 golf course on the site. Kinser took his idea to the city in a meeting of city legislators. The city of Austin never hesitated and granted Kinser permission to build the course on the land. After months of planning and preparation, Butler Park Pitch and Putt opened on June 1, 1950.

Today, more than 50 years after the first ball was struck, the nine-hole course and the land on which it sits still exhibit signs of its original use. Steep embankments on the edge of the former mine walls can be found on several holes including Nos. 1 and 2. On both holes, you tee off from the top of the embankment and hit down to the greens located in what was once the bottom of the clay mine. The clay, however, is nowhere to be found.

Instead, grass and trees including fig, banana and pecan, as well as a variety of plants cover the landscape. The serene environment is unique as the area surrounding the course has been developed through the years and includes several fast-food restaurants as well as a pair of thoroughfares that pass just north and south of the course.

Although today's relaxed, friendly setting provides for a quick get away from the office and a chance to work on your short game, Butler Park Pitch and Putt has had some serious times. The most sobering occurred on October 22, 1951. It was on this day that murder was committed in the clubhouse. That's right, murder.

According to Lee Kinser, current co-owner of the course and an in-law of the elder Kinser, Douglas was working in the clubhouse when a man entered the door with a gun in his hand. The man was Malcolm Wallace, the press secretary for Lyndon Baines Johnson who had yet to become president. Wallace had an issue with Kinser. "Douglas was a playboy and had been having an affair with Wallace's wife," the younger Kinser said.

Wallace wasn't happy. He confronted Kinser inside the clubhouse while patrons stood outside talking and preparing to tee off. The confrontation didn't last long. Wallace shot Kinser four times. Kinser fell to the ground with mortal wounds. Wallace turned around, walked out of the clubhouse and passed the stunned golfers.

The clubhouse still has reminders of that horrifying day. A trashcan just inside the front entrance has a dent from where a bullet struck. And, bloodstains remain on the door leading from the clubhouse into a back office.

Following that fateful day, Wallace went through the legal process while Kinser's brother, Winston, was left to pick up the pieces and run the course. Wallace, according to Lee Kinser, received the first-ever suspended sentence for murder in the state of Texas. "I'm sure the LBJ connection had something to do with it," Kinser said with a smile.

Winston ran the golf course for 50 years until he died late in 2000, only after seeing the course celebrate its 50th anniversary.

He left behind a golf course in good shape. During the 50 years under his tutelage, the course flourished - literally. Winston personally planted the trees, grass and every other kind of greenery found throughout the course including the Tifdwarf Bermuda greens that are soft and receptive to all tee shots. The trees provide shade on almost every hole and the greenery on the course creates a cool environment even on the hottest days.

Through the years, Butler Park Pitch and Putt has become a breeding ground for beginners. It has also seen some of Austin's most well known golfers including Ben Crenshaw and Tom Kite, which started their promising careers on the course.

Although Crenshaw and Kite aren't located on the Hole-in-One Wall of Fame located in the clubhouse, almost 1,000 names of other golfers can be found. Not surprising considering all holes are shorter than 120 yards. The prettiest of all the holes, and the signature hole on the course is No. 7. The 107-yard hole features a small pond in front of the green and is one hole where you can't leave it short.

Whether you're a beginner or an aspiring PGA Tour player, no. 7 and all the other holes at Butler Park Pitch and Putt make it a course worth its green fee and a great place to work on your short game. 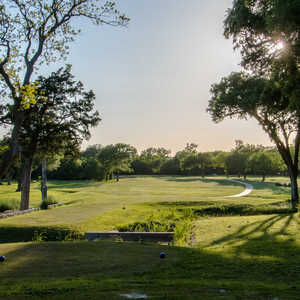