Mustang Creek Golf Club is the second oldest golf course in the Austin area - behind only Hancock Park near downtown - and the fourteenth oldest course in the entire state.

The nine-hole course opened in 1915 as part of the Taylor Country Club. (Editorial note: Not surprisingly, when seeking information on the early days, records are scarce and accounts are even sparser.) According to Dale Cummings, who joined Taylor Country Club back in 1965 and knows a little bit about the history, the course was successful during the early years. Members enjoyed the two-story clubhouse, where weekly dinners are still held today, as well as the nine-hole layout and other facilities, including a large swimming pool, which opened in the 1920s.

In the 1930s the Taylor Country Club, like the rest of the country, confronted tough economic times as it struggled through the Depression. Unlike many, it survived.

Again in the 1950s, the club was beset with financial trouble. In an effort to try and decrease overall costs, the course was completely reorganized to minimize the amount of maintenance required, and in the process, was reduced to a par 34. The course, once again, survived.

For the next 20 years, members of the club continued to play the course, but overall interest waned. In 1986, with the number of players dwindling and the country club confronted with more financial turmoil including the prospects of closing, board members decided to act. After much deliberation, the board members agreed that the golf course must be sold. "We decided we had to sell the golf course and pay off the note," Cummings said.

In an effort to help out the country club and save the course, several board members including Cummings, spurred an effort to raise the necessary money to purchase the course.

In 1987, a group of local men, including several Taylor Country Club board Members, purchased the course for almost $100,000. Mustang Creek Golf Club was born. Fortunately for the general public, the old course was now a new course available for public play. Unfortunately, it wasn't in the greatest condition despite being a private course for more than 70 years.

Under the new leadership, plans were conceived for methods of improving the course. The first such improvement occurred soon after with the installation of a new irrigation system.

While the irrigation was much needed and happened relatively soon after the course changed ownership, other changes weren't as fast in coming. The transformation process of Mustang Creek, which hosts 21,000 rounds a year and plays host to the Taylor City Championship, was slow in gaining momentum and didn't get into full swing until the 1990s.

The early 1990s saw the first of many changes occur including the replacement of the former pro shop, a structure many referred to as a barn or shed. The new pro shop features a nice dining area with a picturesque view overlooking a majority of the holes on the course.

Although the pro shop was a much-needed addition, members of the board realized the course itself was still desperately in need of other alterations. In 1996, the board agreed that four par-3s were too many on a nine-hole course. As a result, the layout was reorganized once again, including the combination of two par 3s into a par 4 and the creation of another par 3.

The new par 4 - No. 8 - measures 335 yards and is a hard dogleg-left. The yardage by itself is not intimidating to say the least. Neither is the 266 yards on the par-4 second hole. It's not the distance that will get you in trouble on these holes, but the accuracy, or more appropriately, inaccuracy of your approach shot that can affect your score. Both holes, as well as several others, including the par-5, 491-yard No. 7, feature crowned or push-up greens. These Tifdwarf Bermuda greens are designed much like a tabletop so any shot that lands on or near the edge of the perimeter may roll off the putting surface.

The greens, however, are in excellent condition and receptive to soft shots that hit in the proper location. What's more impressive is that locals such as Cummings, who had an interest in the course, constructed three of the greens -hole Nos. 3, 6 and 9 - from scratch. This was yet another cost-cutting move. Cummings said each of the three greens meets USGA specs. "They were our pet projects and we did them ourselves." Cummings also built the practice green from scratch.

In keeping with the trend of continual improvement, the club also added water to several holes in recent years. The par-3, 160-yard third hole features a pond that takes up most of the 160 yards. No. 4, another par 3, measures 143 yards and includes a small pond before the green. No. 9 and No. 18, which play to two different greens, also feature a small pond that sits directly in front of the No. 9 green behind a wall of cattails.

Conditions: A
Layout: B
Service: B
Practice Fac: C
Club House/Pro Shop: B
Pace of Play: B
Value: A
Overall Rating: B 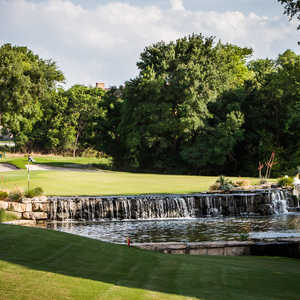