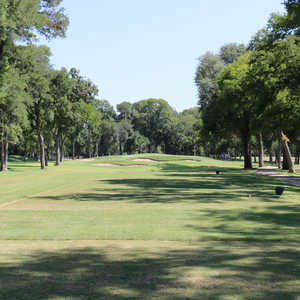 One of the all-time classics of Texas golf, Brackenridge Park was designed by the venerable A.W. Tillinghast in 1916, and is the oldest public course in the state. Whether it's the old limestone starters shack, the commemorative plaques that date the course, the stories of the old Texas Open tourneys played here from 1922 to 1959, or the massive, museum-like, Tudor rock clubhouse with its Champions Boards hanging on the walls, this course must be played by every Texan golfer.

Imagine old man Brackenridge hunting bear on this property back in the early days of Texas. Imagine Ben Hogan, Walter Hagen, Sam Snead, Arnold Palmer, and Byron Nelson gracing the fairways. Imagine the great game of golf working its way into the consciousness of old-time Texas, while the mastermind behind revered Bethpage, Baltustrol, Winged Foot, and San Francisco CC strutted into town to put his mark on Texas along the San Antonio River.

The flat, old course is not known for its difficulty, although the majestic oaks and pecans that line the narrow fairways have their ways of reaching out and sucking in shots that aren't perfectly straight. There's even the random palm tree here at Brackenridge. The one you'll most likely notice affects the approach on No. 4.

The river comes into play on several holes. In fact on the back nine, creeks and ponds come into play on seven of nine holes, complementing the straightforward front nine, which has only one pond.

In 1968, Brackenridge underwent extensive renovation due to highway construction on 281 and I-35. The course lost 10 acres, and a few of the long par 4s on the back were shortened.

The par 3s on the back are memorable. Hole 16 plays over a creek into an elevated green, and the 18th plays 166 yards over a pond.

After the round, lounge in the historic clubhouse before heading to Tomatillos Cafe and Cantina for dinner, then try the popular Liberty Bar, a neat joint that leans so much you'll think it's about to collapse.

Getting there : From Broadway driving north, turn left on Mill Race Street, which leads directly to the course.

(based on 6 reviews)
See all reviews | Submit your rating
«