The best golf course in Dallas just may be Cowboys Golf Club. While golfers here might tire of the overload of team logos and memorabilia, no one's complaining about the golf: It's a terrific golf course in outstanding condition.

Yes, that's the Dallas Cowboys star in the middle of the fourth fairway at Cowboys Golf Club.
«

Definitely a must-play for the DFW-bound golfer, Cowboys Golf Club is first-class all the way, and fortunately void of the cheese that you might suspect from an NFL-themed course. In this location next to the Grapevine Municipal and the Lake Grapevine dam, Jeff Brauer created what might be his most impressive design.

GRAPEVINE, Texas - It might be a dilemma for a Miami Dolphins fan or a Pittsburgh Steelers follower. If you're a Redskins or Eagles rooter, it's a downright moral dilemma.

The best golf course in Dallas, Cowboys Golf Club, is so Cowboys-centric that anyone but Troy Aikman could get sick of that blue star after a few holes here.

Think of a Donald Trump golf course, then replace all the Trump signage with star signage. Now you're getting the idea.

"At least we stuck them with TO. That makes me feel a little better about spending my money here," visiting Eagles backer Alex Tis said.

The bartender in the Tony Romo jersey scrunched her face in mock horror. Then she served Tis another beer in a Dallas Cowboys glass.

Welcome to Cowboys Golf Club, a great golf course disguised as a gimmick.

You get your Cowboys cart emblazoned with the name of a team great (I got the Herschel Walker). You hit off Cowboys tees on the practice range. You drink complimentary Cowboys bottled water and walk past replica Super Bowl trophies in the clubhouse.

And above all that, you get a terrific golf course in outstanding condition.

Yes, it's a little irritating that Jerry Jones, one of the most annoying owners in pro sports, pulled this off on first golf try (with help from his son Stephen). But you'll get past that. Dramatic, go-for-it par 4s with big elevated tees and fairways greener than the Texas Stadium turf have a way of smoothing things over.

Still not over it? Just do your own Terrell Owens and stomp on the star in the middle of the fourth fairway.

Didn't we mention there was a Cowboys' star in the middle of a fairway?

Ignore the cheesy touches and focus on 7,017 yards of golf that give the average duffer a chance to swing loose. The par 4s, four of them well under 400 yards, scream for a little daring.

"There are a lot of holes where you have the chance to hit shots that lead to a birdie," Cincinnati golfer Scott Enright said. "You might not always hit those shots - OK, most of the time you won't - but it's fun to have the chance."

It's a theatrical layout, with bunkers that are Fazio-like in scope and scale, filled with distinctive orange Texas sand - all the more distinctive if you spend all day in it.

The elevated tees make the bunkers loom even larger in your swing thoughts. You're going to be staring out at perfectly green rolling fairways with orange bunkers splattered around like bomb craters.

No. 1 sets the tone - a rare par-5 start with a fairway that unfurls like a rug to a ridge-top green. Approach shots seem to bounce off this tilted tormenter like it's a tennis net.

The second is even more visually macho, with the tee looming over another rolling fairway that looks awfully skinny from your perch.

Welcome to Cowboys Golf Club! Y'all stay a while and lose some balls.

Cowboys does give regular-Joe Hackers a break by keeping the forced carries to a minimum. And that fourth is one of the most drivable and fun par 4s here. Another high tee gives you a great view of the blue star in the grass.

Whether you take a picture of yourself near the star or spit on it depends on your rooting interest.

The verdict on Cowboys Golf Club

Good luck finding a better golf course in Dallas than this Jeff Brauer design. You might discover one. You will not unearth two.

Better yet, it doesn't seem like Jones is out to make you pay for his free-agent signings. Cowboys has twilight rates that, while not pocket change, are a bargain for this play. In Arizona, you'd drop $200 on a track this good.

The staff doesn't rush golfers on the twilight rate either. On a Saturday night, group after group came in after 7 p.m.

Another bonus is the lack of homes (though some townhouses are going up near the star hole). There's some jet noise from nearby Dallas-Fort Worth airport, but it's nothing compared to what you get on some Arizona and Las Vegas runs.

Who knew Jones had this in him?

Maybe, but who cares? He knows how to make golfers swoon.

Your best bet may be to just hang at the clubhouse and eat food served by those jersey-wearing bar babes. If you need a break from the blue stars, Oceanaire in the Westin Galleria is a decent high-end seafood spot with great clam chowder.

Cowboys is out in west Dallas suburb of Grapevine, a resort and wine town (hence the name). The Gaylord Texan down the road from the club is a sprawling mini-city of a resort with the biggest hotel sports bar you'll ever see, a wine café where you can buy high-end vintages by the ounce and meandering river paths.

Yes, there's a river inside. This is Texas' version of Disneyland for adults. 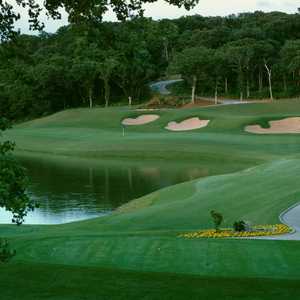 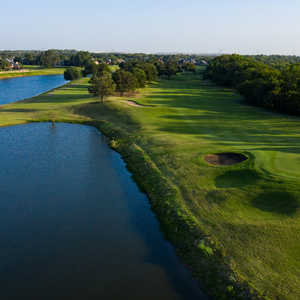 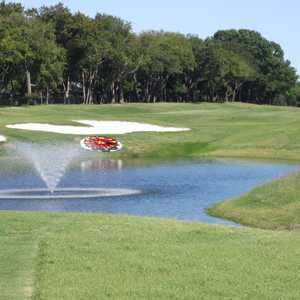 Tradition at Bridges at Firewheel Golf of Garland
Garland, TX
Details Book from $24
<>