BASTROP, Texas -- Long before it was a reality, Les Appelt envisioned a golf hole that has become recognized throughout Texas.

No. 15 -- the signature hole at ColoVista Country Club in Bastrop -- overlooks the Colorado River.
«

(based on 5 reviews)
See all reviews | Submit your rating

Located in the Lost Pines area of Bastrop 30 minutes east of Austin, ColoVista Golf Club is a dramatic, immaculate course that’s consistently rated one of the best in Texas. Some actually question whether it is in Texas, given the unusual terrain that the course flows through.

When you climb to the tee box of the 191-yard, par-3 15th hole at ColoVista Country Club, you might think you are in the Rockies.

"It's almost funny seeing the reaction of golfers when they see the view at 15," Head Professional J. Moore McDonough said. "It's like a calf seeing a cattle guard for the first time. There's this blank stare and then reality sets in -- you have to hit a golf shot."

The view is amazing. The sheer drop down to the green is enough. But this view is also surrounded by the heavily-wooded Lost Pines area of central Texas and the Hill Country bluffs. Not to mention you can spot the Colorado River snaking its way in the distance.

Yep, this is why Appelt called it ColoVista.

"I saw this high point as an anomaly on the topographical map," Appelt said. "The first time I climbed to the point it was just a jungle with a view of the river in the background."

If there is a chink in the pace of play at ColoVista, this is it. That's why they placed a "No Mulligans Please" sign on the tee. But it is impossible not to spend a few extra minutes just looking at the view and snapping photos. The shot? Well, most average golfers are going to baby this golf shot. But if you have played lots of long, dramatic downhill par 3s, you will know you have to take enough club and hit it hard. Baby the shot and you are going to be short, sometimes well short.

The land was calling to him. He made his own plans then hired golf architect Craig Metz, son of Dick Metz, a Fazio protege.

"The first thing Metz said was I had the nines backwards," Appelt remembered. "He said my back nine, the links-style nine, should be the front. I agreed."

Unfortunately, Craig Metz, 55, died on the job at a golf course in Georgia, but his vision for ColoVista lives on.

"He would get an idea and would work at it 12 to 14 hours a day," McDonough recalled. A heart attack claimed Metz.

"I think the best compliment we get is when golfers come off the 18th. Instead of stomping off with their clubs and slamming them down in their car trunk, they want to keep playing," McDonough said. "It is very varied terrain with two distinct nines, but it doesn't beat you up. I like to think of Bolero -- the golf course builds to a crescendo."

With its central Texas location, just less than an hour from Austin, McDonough has met many golfers from San Antonio, Dallas, Houston and Austin who use the golf course as a meeting place.

ColoVista, opened in June 1997, hosts 33,000 rounds a year with 10-minute tee intervals and is generally ranked by pollsters as one of the top 20 golf courses in Texas -- some rank it in the top five. The course record is 66 held by Heath Fell. It's home for the Senior Masters Amateur Championship, which pits only tournament winners against one another.

"This place would be special even if there wasn't a golf course," Appelt said. "I have an idea for another course -- I have the land, but at this point I don't know if I'll expand or not."

The course measures 6,966 from the tips and a short 4,803 from a tee area called "Speed", which is shorter than the reds. The par 72 has Tifdwarf greens and 419 Bermuda fairways spreading out across 378 acres.

The front nine links layout opens with a downhill par 4, 468 yards and closes with an uphill par 4 at 383 yards. Some love this links nine and others don't.

The back nine takes advantage of the Hill Country terrain with climactic elevation changes, the river bluff view, a couple of seemingly 90-degree doglegs and countless pine trees line the fairways.

"The back nine is the heart of the course," R.A. Karr said. "It goes up into the pine hills and here it is deserving of its good reputation. Nos. 10, 11, 12 are an excellent stretch of holes. No. 13 is a breather par 3, and then nos. 14, 15, 16 are fabulous! I think no. 15 is the prettiest par-3 I have ever seen -- looks like a quarter-mile drop from the cliffside tee, nice bunkers and swales around the green, and a double-channel of the river loops behind the hole. I just wish they had built the front nine up here as well." 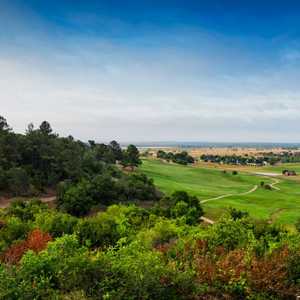 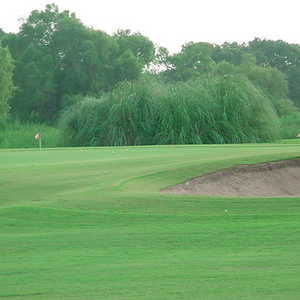