SAN ANTONIO, TX -- Thirty-three years after Arnold Palmer's near-miss PGA Championship at Pecan Valley Golf Club, The King was in the Alamo City to unveil his The Palmer Course at La Cantera design in 2001 and was asked about that PGA for the zillionth time.

"I'd just as soon forget about that day at Pecan Valley," Palmer said. "I struck a poor drive on No. 18, which on this day was playing at 488 yards, hit a good second and followed it with a bad putt."

Palmer never won a PGA Championship, missing out on the career grand slam. But The King did win three Texas Opens.

It was July 1968, the 50th PGA Championship, and Julius Boros, the leader, was standing on the 18th tee when Palmer pulled out a fairway wood after hooking his tee shot into some gnarly rough near TV cables, short of Salado Creek.

The 18th at Pecan Valley is a slightly uphill par 4 at 418 yards and the creek crosses the fairway diagonally. If you hit it down the left fairway boundary it is about 260 to 270 to carry the creek. Hit it down the right side and the carry is more like 220 to 230.

"I overcooked my drive," Palmer recalled. When he arrived at the ball Palmer pulled out a 3-wood -- the same one that's on display in the Pecan Valley Clubhouse.

"I decided to go for it. Doc Giffin (Palmer's long-time friend and personal assistant) told me he was surprised I was going for such a risky shot because it's one of the toughest in golf, but I figured I might never get this close to a PGA Championship, something that had eluded me for so long."

The ball carried 230 yards and stopped 12 feet above the hole and Palmer later said it was probably the best wood shot of his career. If he holed the putt he would tie Boros, but his stroke curled off and rolled inches past. Boros' 281 was good enough for the title and a $25,000 prize.

A Texas Golf Treasure Is Revived

Pecan Valley Golf Club is a Texas golf treasure that has made an unbelievable comeback. Just 20 years after that historic PGA Championship, the J. Press Maxwell gem, which had opened in 1961, was in dramatic decay. The fairways were hardpan and the rough was dried and brown.

In 1998 a heralded reconstruction returned the course to its former glory. Under the direction of American Golf and architect Bob Cupp, Pecan Valley Golf Club got a $5.5 million facelift. Officials at the USGA took notice selecting the course to host the 2001 U.S. Amateur Public Links Championship.

The "new" Pecan Valley has gotten rave reviews from the local media and golf pros, picking it as the top upscale golf course in San Antonio over No. 2 La Cantera. They also selected hole No. 2 as the best in town.

Home to the '67, '69 and '70 Texas Opens, the course had been losing a battle with flooding and neglect.

Locals say the area was a jungle in 1961 when the golf course was built. The location is near the historic Goliad Road, which was constructed in 1720 by Spanish explorers. There's a historic marker on the course celebrating the "Burnt Oak", a 100-foot high live oak with a girth of 22 feet. It's estimated age is 800 years and it was used for years as an early navigational guide.

Pecan Valley is a picturesque par 71 at 7,010 yards with huge native pecan and live oak trees, some of the trees' long, low-hanging arms can frustrate you when your ball rolls under their massive expanse. You could spend all day playing the ball back in your stance slapping a 3-iron worm-burner back in to play.

Situated on 200 historic acres, Salado Creek winds through the front nine five times and the back nine three times. Its bunkers are strategically placed and the doglegs will frustrate you. And now, thanks to overseeding in the winter, its conditioning is impeccable.

That award-winning No. 2, a 453-yard uphill par 4, is the No. 1 handicap hole. There's a bunker left, catching those who hook it, but the real difficulty is in the approach shot, which must fly to an elevated green with a false front. It's easy to select the wrong club and stand there watching as your short stroke comes tumbling backward toward the fairway.

Many call No. 14 the signature hole. It's a 467-yard, par 4, featuring a tee-shot carry over water to a dogleg-right fairway lined with trees and the lake continuing down the right. The approach is uphill to a huge green. Any kind of drive to the right side of the fairway or rough is dead -- only a miracle bowling-alley lane shot will allow you on the green in two. 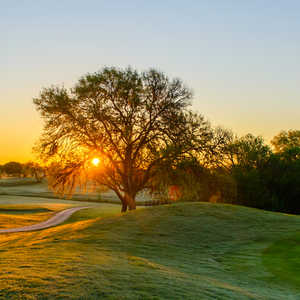