Water under the bridge: Austin's ShadowGlen Golf Club is back

MANOR, Texas -- The gates are reopened, the water is back on and ShadowGlen Golf Club is well on its way of regaining its place among the best public courses in the Austin area.

After a temporary closing in 2011, ShadowGlen has a bright future.
«

Located just 15 minutes northeast of downtown Austin, ShadowGlen Golf Course is considered by locals to be one of the area's hidden gems. At 7,174 yards from the back tees, it is a long, tough course that will test even the most seasoned players. Some consider it to be the most difficult public golf course in Texas.

Manor broke its water contract with ShadowGlen during the summer drought of 2011, turning the water off for seven months. Considering it was one of the hottest and driest summers on record in central Texas, the damage was crippling. As the course's owners fought the city for their water rights, the grass sat unattended -- and baked.

The city and ShadowGlen reached a settlement in the spring of 2012 and a 10-year deal was secured, so the course reopened March 15. The maintenance crew had a lot of work to do to save what was left of the grass. It will take most of the summer to get the course back to peak condition, and discounted green fees will reflect the work in progress.

It doesn't take many holes into a round at ShadowGlen to realize this was a facility worth saving. It's certainly a unique layout in the area.

While most courses, especially to the west of Austin (and even nearby Bluebonnet Golf Club), are set on rocky, hill-country terrain, ShadowGlen has subtle, rolling hills, small creeks, ponds and mature trees that make the course feel like you might be somewhere in the Midwest.

Designed by the Texas-based team of Roy Bechtol and Randy Russell, the course originally opened in 2004 as a "Top 10 Best New Course" of the year by Golf Digest. The layout can stretch to more than 7,100 yards and features large, multi-tiered TifEagle greens (which by June 2012 were rolling quite well again). Tough pin locations can be the course's main defender, as landing zones in the fairways are quite large in most cases.

Two relatively straightforward par 4s kick off the round, but the third hole is one of the best par 5s in the Austin area. The approach shot must find its way through a handful of trees peppered in the fairway leading up to the green.

It's probably best to play it safe there, but it'll be tough to exercise much restraint on the ninth hole, a drivable par 4 if you're willing to sail a tee shot over a hazard almost the entire way to the green.

If the wind is cooperating, the 18th hole is a green-light special. Although water guards the green, it shouldn't be much of an obstacle on this 513-yard par 5. With a big drive off the tee, a final shot at eagle is possible.

ShadowGlen has made strides to become one of the most veteran-welcoming golf courses in Texas. The club hosted the Veterans National, an event held by A Veteran's Voice, in 2010 and will host it again in 2012. And each month, the club, in cooperation with A Veteran's Voice, hosts a veteran's appreciation event, where military are invited to play 18 holes free of charge. Contact the club directly to learn when the next outing will be held.

ShadowGlen Golf Club's potential is as high as north Austin and Round Rock's top daily-fee courses such as Avery Ranch Golf Club, Teravista Golf Club and The Golf Club at Star Ranch. But the fact that ShadowGlen is in a less-populated and lower-income area means the green fees are always going to be a little lower, making the course one of Austin's best values.

Facilities at ShadowGlen G.C. include a driving range and multiple putting and chipping greens. The clubhouse has a restaurant, Foundry's, which serves breakfast and lunch. Golfers can dine inside or relax with a few drinks on a beautiful deck overlooking the course. 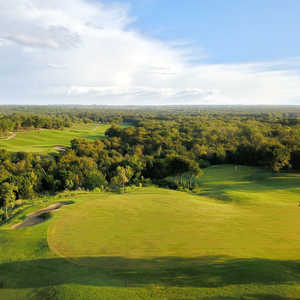